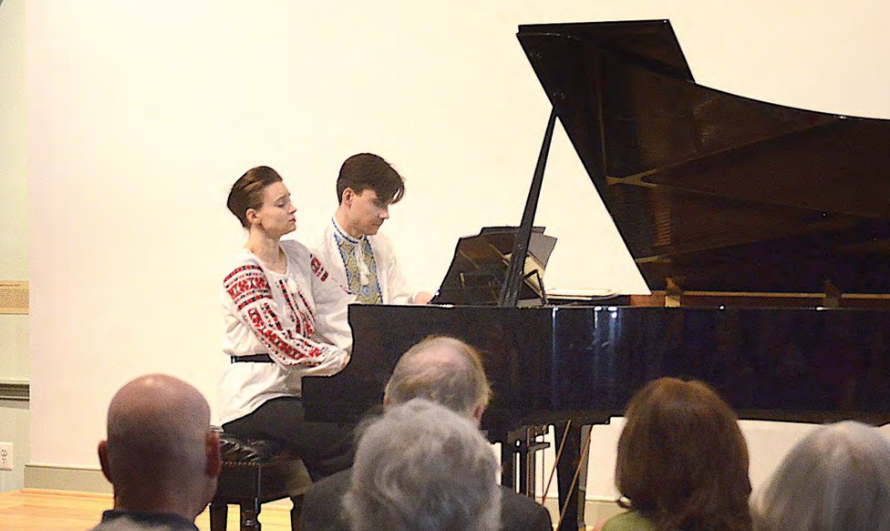 ALEXANDRIA, Va. – Anna and Dmytro Shelest – the Shelest Piano Duo – attracted a full house March 17 at the historic Lyceum in Old Town Alexandria (just south of Washington) in the third concert of The Washington Group Cultural Fund’s 2018-2019 Music Series. This was Anna Shelest’s second performance in a TWGCF concert (her first performance was in 2011), and she was joined by her pianist husband, Dmytro, in a two-hour program that included works by Fanny Mendelson, Amy Beach, Clara Schumann, and those of four Ukrainian composers, Mykola Lysenko’s Overture to the Opera “Taras Bulba,” Oleksandr Zhuk’s “Ukrainian Rhapsody,” Sergiy Bortkevych’s “Folk Melodies and Dances” and Myroslav Skoryk’s “Three Extravagant Dances,” which concluded the concert and was welcomed with a long standing ovation. The 2018-2019 TWGCF concert season, marking its 25th anniversary, began last September with pianist Pavlo Gintov and followed in October with the Fedorykas ensemble. It will conclude on May 19 with Stefania Dovhan, who lives in Europe, and last performed for the Cultural Fund series in 2003, when she was just 18. The current music series is funded by a group of more than 75 sponsors and suggested at-the-door concert donations of $20.