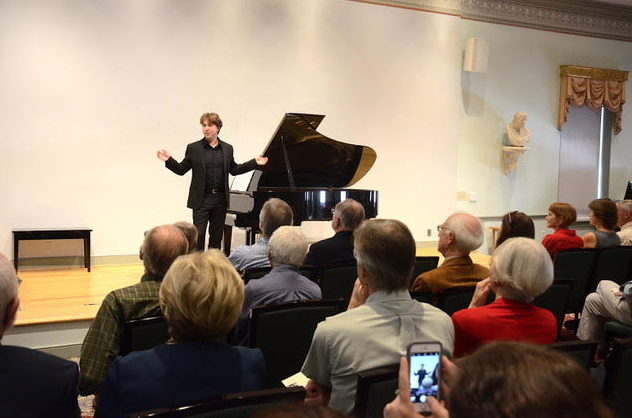 Washington — Ukrainian pianist Pavlo Gintov, who debuted at the Kyiv Philharmonic Hall at the age of 12 and has since traveled and performed at major musical venues worldwide. And on September 30, he introduced himself for the first time to the U.S. capital area classical music audience, launching The Washington Group Cultural Fund’s 25th anniversary concert series at the historic Lyceum in Old Town Alexandria, Virginia.

Characterized in earlier reviews as a “poet of the keyboard” in the Illinois Entertainer and a “musical storyteller” in Japan’s Shikoku News, Gintov’s program and performance here fit that description, as he performed and discussed the style and content of seven classical piano fantasies composed over the past three centuries.

Following the formal introduction by TWGCF co-diretor Christine Lucyk to the full-house audience at the Lyceum, Gintov described the program’s composers and their fantasies, an ambiguous and intriguing musical genre he would be performing and discussing between each piece.

The composer and his Sonata-Fantasia that drew the most attention of the audience was Theodore Akimenko (1876-1945). As Gintov noted, it was never recorded and his was the first performance of that piece in this country.
Pavlo Gintov concluded the concert with the Chopin’s Fantasy in F minor, which, he said, possibly focused on Russia’s invasion of Poland in the 19th century. He recalled that after an earlier performance of this piece, he asked a young lady musician what she heard being described in its two parts. The first sounded like nuclear war, she said; and the second – the end of the world.

The audience found it hard to part with Pavlo Gintov and recalled him to the Lyceum stage with a long standing ovation.

And before the reception that followed the concert, TWGCF co-director Christine Lucyk noted that the next musical event in the 2018-19 Music Series, October 21, will feature The Fedorykas, a local Ukrainian-Scythian musical ensemble.