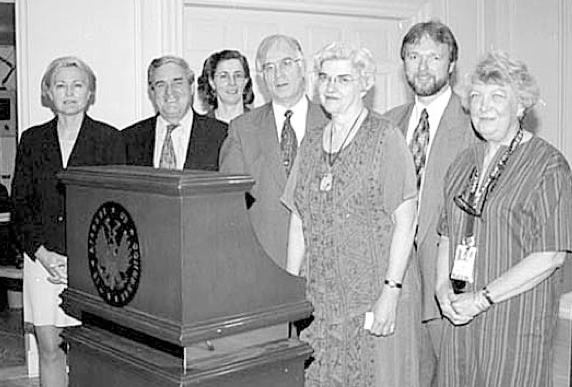 05 MarBachs Are Back: Family’s Scores Found in Ukraine

By Gail Fineberg – A scholar’s career-long search for Bach family music that disappeared from Berlin during World War II led to an archive in Kyiv and 5,170 items (about 1 million pages) of music, much of it never seen or performed, at least not for 300 to 400 years.

“This was a remarkable discovery in Kyiv,” said Christoph Wolff, professor of music at Harvard University and dean of its Graduate School of Arts and Sciences, who told the story of his odyssey to a large lunchtime audience in the Coolidge Auditorium on June 22.

Assisting him with his quest was Patricia K. Grimsted, an associate of Harvard’s Ukrainian Research Institute, a senior research fellow at the U.S. Holocaust Memorial Museum, and U.S. project director of ArcheoBiblioBase, a Russian and Ukrainian archival directory database in Kyiv and Moscow. She told her part of the story.

Their Library of Congress visit was sponsored by the LCPA Ukrainian Language Table, the Music Division and The Washington Group Cultural Fund, whose mission is to foster and promote Ukrainian culture in the Washington metropolitan area.

Dr. Wolff was working on his doctoral dissertation in the mid-1970s, when his research into sources pertaining to Johann Sebastian Bach’s large, musical family hit a dead end. From an 1832 inventory he knew there was a rich deposit of Bach family materials, dating from the 17th and 18th centuries, in the musical estate of Bach’s second son, Carl Philipp Emanuel, which was housed in the archive of the Berlin Sing-Akademie. That archive disappeared at the end of World War II.

“Nobody knew its whereabouts,” Dr. Wolff said. “I never really gave up on where the Sing-Akademie treasures were, although no one knew whether they had been destroyed or misplaced.”

Tracing the history of the Sing-Akademie, which was founded in 1791, Dr. Wolff displayed images of the concert hall in which, in 1829, Felix Mendelssohn conducted the first performance since J.S. Bach’s death in 1750 of the St. Matthew Passion (this concert is credited with renewing interest in J.S. Bach’s music). Dr. Wolff also showed an image of the Sing-Akademie’s chorus library, in which the “older stuff,” no longer performed, was stashed on lower shelves. It was this “older stuff” that Dr. Wolff longed to see.

Sing-Akademie materials were last available for study in the 1930s. Dr. Wolff’s research turned up a packing list that indicated the C.P.E. Bach materials were part of the Sing-Akademie inventory that the Germans had removed from Berlin in 1943 for safe-keeping in Silesia, a southeastern province of Germany that now is part of Poland. He tracked the materials as far as Ullersdorf Castle.

“That’s all I could find out,” Dr. Wolff said. After the Soviet invasion of eastern Germany in 1945, the Sing-Akademie archive disappeared. One theory held that the archive probably was in Moscow. But nobody knew for sure, or would say.

Then, in the early 1980s, a Russian copy of German baroque music appeared that caught Dr. Wolff’s attention; there was only one original, and he knew it was in the Sing-Akademie archive. “I then heard a rumor the archive might be in Kyiv,” Dr. Wolff said. He alerted his European network of colleagues and musician friends who traveled abroad, but no one could learn anything more. That is when he and Dr. Grimsted “stuck our heads together.”

Dr. Grimsted, who became known in the Soviet Union as the “archive spy” during the 1980s, was devoted to learning the fate of captured cultural treasures, “trophy” art, books and archives plundered from countries occupied by Germany and from Holocaust victims. Materials seized by Allied forces were returned, but goods gathered up by the Soviets disappeared and their whereabouts remained shrouded in secrecy. “The Soviet Union was more interested in reparations than restitutions,” Dr. Grimsted said.

Searching Ukraine for lost cultural treasures in connection with her forthcoming book, “Trophies of War and Empire: The Archival Heritage of Ukraine, World War II, and the International Politics of Restitution,” Dr. Grimsted stumbled on a captured Soviet document among French intelligence records indicating freight car loads of books and other treasures from eastern Germany (part of Poland after the war) had gone to Moscow and Kyiv. The official response from Kyiv was that the document Dr. Grimsted presented was “fabricated.”

With the assistance of a colleague, Hennadii Boriak, deputy director of the Institute of Ukrainian Archeography and Source Studies, National Academy of Sciences of Ukraine, Dr. Grimsted closed in on Kyiv. Dr. Boriak, on a chance meeting in April 1999 with an official of the Central State Archive-Museum of Literature and Art of Ukraine, noted a large collection of foreign music.

Learning that a cache of more than 5,000 manuscripts might “possibly” contain German music, “possibly” some Bach scores, Dr. Grimsted sent a note to Dr. Wolff, suggesting he might “possibly” want to pack his bags for a visit to Kyiv.

When Dr. Wolff, Harvard music cataloguer Barbara Wolff, and Dr. Grimsted arrived at the Central State Archive in Ukraine in late June 1999, they were told the archive “was under renovation.” But they persevered and were admitted to a climate-controlled room to find boxes “in optimal storage,” Dr. Grimsted recalled.

In the boxes they saw bound volumes of music, a sheet clearly labeled “Sing-Akademie zu Berlin,” a letter from Goethe.

“What we saw confirmed the collection was intact in Kyiv,” Dr. Grimsted said.

Dr. Wolff said the collection contained 5,170 items of music, 85 percent of which was music manuscripts. The collection itself had never been properly catalogued and was guarded closely by academy directors, who allowed very few to see it, Dr. Wolff said.

Even older was music by Bach family composers, such as the original score for a motet written by an older cousin, Johann Christoph Bach, and an eight-part motet composed for two choruses by Johann Christian Bach.

Dr. Wolff said he thinks that, in 1748, J.S. Bach was arranging the Johann Christoph motet for performance at his own funeral; J.S. Bach died two years later. The BBC performed the work last month, which was the first time it had been heard since Bach’s death in 1750. Dr. Wolff played a recording for the library audience.

Dr. Wolff said negotiations between Ukrainian authorities and Harvard representatives would establish a collaborative project by which Sing-Akademie materials will be catalogued properly and microfilmed, with the help of the Packard Humanities Institute. One copy of the film would remain with the Ukrainian Academy of Sciences, one would go to the Sing-Akademie, one of Germany’s oldest continually performing organizations, and one would go to Harvard University.

Dr. Grimsted added that Ukrainian authorities now claim the German materials were never classified and never secret. “Or, they never knew about it,” she said.

Ukraine leads other states of the former Soviet Union in the return of trophy cultural materials, for example, to Dresden and to private sources, Dr. Grimsted said.

[Editor’s note: The Washington Group’s Cultural Fund sponsored an archival recording of the lecture for the library’s permament collection.]