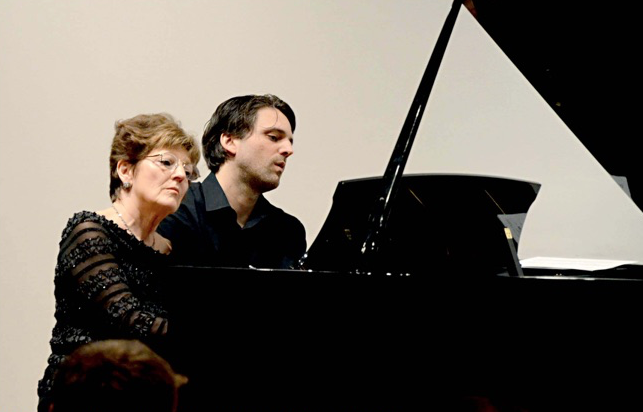 WASHINGTON —Written by Yaro Bihun. It was a unique concert in a number of ways and many members of the audience afterwards were at a loss for words to describe what they had just experienced. But their intensely emotional ovations and the warmth of the expressed on their faces did not require words of explanation.

On the receiving end, standing on the stage of the Lyceum in Alexandria, Va., were composer Boris Skalsky and Zdanna Krawciw-Skalsky — his mother — who together had just performed his Seven Spanish Dances for Piano Four Hands, which concluded the March 18 concert organized by The Washington Group Cultural Fund devoted exclusively to his classical compositions.

Also performing his works that afternoon were fellow New York-based musicians: cellist Rubin Kodheli, who played five of Skalsky’s 12 Preludes for Solo Cello; the Mivos Quartet, which performed two of his string quartets (Nos. 1 and 3); and jazz guitarist (as well as composer) Anthony Pirog, who joined with Skalsky to awe the audience with their rendition of his Music for Piano, Electric Guitar and Loops, which, as Skalsky indicated in the program notes, was tailored to this guitarist’s unique talents.

Anthony Pirog is not new to the capital area’s music scene. He was a recent winner of the Washington Area Music Association’s “Best Modern Rock Instrumentalist” Wammie Award.

Neither is Zdanna Krawciw-Skalsky, a long-time Washington-area resident musician and teacher. She began her piano studies with the Ukrainian Music Institute in Philadelphia and later with the Curtis Institute of Music. She has performed in Philadelphia, New York, and Washington, both as a soloist and as a collaborative pianist. She has also taught mathematics at Montgomery College in Rockville, Md.

As Boris Skalsky noted in the concert program notes, the Spanish Dances they performed together has a special sentimental place in their personal and musical relationship. As a teenager, he and his mother would often play Brahms’ Hungarian Dances, “mostly for our own enjoyment, but later in more formal settings.”

“Having enjoyed this, I wanted to write something of my own in the four-hands genre specifically for my mother and me to perform,” he said. The result was the Seven Spanish Dances — “meant to be enjoyed in the spirit with which they were written, delighting in melody and rhythm and the joy of performance.”  He and his mother first performed these dances as part of his undergraduate thesis concert.

Boris Skalsky is a classically trained musician and composer who earned his master’s degree at the Manhattan School of Music. His classical works, including art songs, piano works, chamber music, and an orchestral overture titled Memoriae, have been premiered in the U.S. and abroad.

He is also the founder of a rock band, Dead Heart Bloom, a founding member of the D.C. newgaze outfit Phaser and recently the bassist for former Smashing Pumpkins drummer Jimmy Chamberlin’s band Skysaw. He has toured extensively across the U.S. and Europe.

Skalsky’s music has also appeared in a number of films and broadcast TV shows, including The Shield on FX, NBC’s Friday Night Lights, and FOX’s Terminator series, as well as in the new movie Friends With Kids, and will be in the upcoming documentary film Soldiers of Paint. He has been praised by Rolling Stone magazine and reviewers on National Public Radio and eMusic.

The Skalsky concert concluded the regularly scheduled TWG Cultural Fund 2011-2012 Music Series, which included performances by bandurist Julian Kytasty, pianist Anna Shelest, and soprano Victoria Loukianetz accompanied by Marianna Humetska. The fund’s director, Svitlana Shiells, noted, that it was organizing an additional “Gala Concert of Young Talents,” featuring children from the local Taras Shevchenko Ukrainian School and other young musicians, to be held on Sunday, April 29, at 3:00 p.m., at the Lyceum in Alexandria.

This spring’s Ukrainian-American Washington area arts calendar also includes the return to this area of soprano Stefania Dovhan, who will sing the role of Marguerite in Charles Gounod’s Faust at the Baltimore Lyric Opera House on April 20 and 22, and TWGCF Director Svitlana Shiells presenting a lecture about “The Japanese influences on Gustav Klimt” at the Embassy of Austria on April 27.