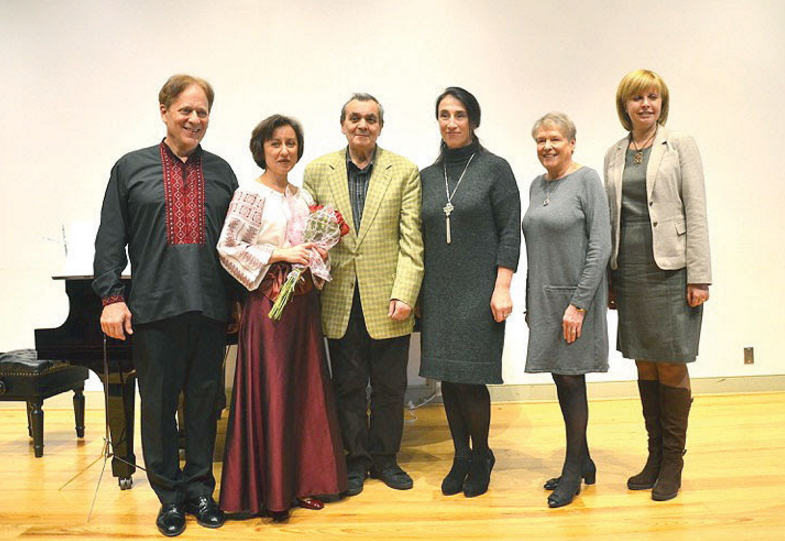 WASHINGTON – By Laryssa Lapychak Courtney. On March 12 The Washington Group Cultural Fund (twgcf.org) presented violinist Solomia Soroka, accompanied by her husband, pianist Arthur Greene, in the third concert of its Sunday afternoon 2016-2017 Music Series at the Lyceum in Alexandria, Va., just across the river from Washington.

Cultural Fund Director Christine Lucyk warmly welcomed the audience and introduced the Ukrainian avant-garde composer Yevhen Stankovych, whose work was being featured in the concert. She stated that the Washington audience was honored to be included in the tour.

Ms. Lucyk also welcomed the Ukrainian ambassador’s wife, Ludmila Mazuka, and the cultural attaché, Olha Ivanova, who were in attendance. In her introduction, Ms. Lucyk recalled one of Ms. Soroka’s previous concerts in Washington, also sponsored by the Cultural Fund, which was highly praised in The Washington Post by a legendary music critic, the late Joseph McLellan.

Ms. Soroka appeared on stage dressed in an elegant ensemble which included a beautiful embroidered blouse (vyshyvanka) sewn with gold thread by her grandmother. Ms. Soroka, who is a professor of violin at Goshen College in Indiana and also has a strong interest in Maestro Stankovych’s work, much of which is steeped in elements of Ukrainian culture, provided interesting commentary regarding the imagery evoked by his music.

The program began with a piece called “Ukrainian Poem” that the composer wrote in 1997 for his son, who was studying violin in Canada. It began with a flowing melodic line, conjuring images of the beautiful pastoral Ukrainian countryside, and then abruptly shifted to turbulent atonal phrases evoking Ukraine’s tragic history. The final measures bespoke the hope for a peaceful and prosperous post-independence Ukraine.

“The Triptych, At the Mountain Plateau,” was written in 1972 and included “Lullaby,” “Wedding” and “Improvisation.” In “Lullaby,” one could imagine a mother singing to her baby and trying to ward off evil and supernatural forces that emerged as noises in the night. In “Wedding,” one could almost see the revelers singing, drinking and dancing (or stumbling about) which the composer achieved with changing meters. “Improvisation” was the most complicated and modernist piece of the triptych, utilizing polyphonic elements. The piano and violin were never seemingly together, although in reality they were.

In “Angel’s Touch,” written in 2013, Stankovych’s angel has a strong will and is very persuasive. Ms. Soroka’s beautiful tone was evident throughout the long melodic lines, as the angel attempted, sometimes gently and sometimes not so gently, to make its case and turn the world into a better place.

“Romance” demonstrated the composer’s style of the piano creating an impressionistic canvas upon which the violin’s dreamy lyrical passages unfolded. “Poem: A Dedication” (dedicated by the composer to humanity) was commissioned by the Benjamin Britten International Violin Competition in London as a piece to be performed by all the contestants in the competition in 2008. Once again, beautiful melodic lines were interspersed with turbulent atonal passages.

“Morning Music” described the everyday reality of waking up to make coffee, eat breakfast and get organized for the day. Here Ms. Soroka’s long sonorous lines intertwined with Mr. Greene’s very sensitive playing, which created an impressionistic canvas of morning dew, a gentle breeze and the sun rising.

The final piece, “Maydan Fresco,” written in 2014 requires no explanation. One could hear the bullets, the screams and the ensuing chaos. The strident atonal chords played by the violinist and echoed by the pianist with equal strength emphasized the gravity and the tragedy of the situation. This was followed by great sadness; the sobering realization of what had transpired, the consequences and the losses. The piece ended with harmonics on the violin, the first five notes of the Ukrainian national anthem.

Ms. Soroka’s surprisingly strong and controlled bow arm produced warm and rich tones in long melodic passages just as effectively as it produced harsh chords in strident passages. Her performance with Mr. Greene reflected their close partnership and was evident in the dialogue between violin and piano throughout Maestro Stankovych’s works. Mr. Greene’s simultaneous use of both the left (soft pedal) and right pedal (damper pedal) very effectively altered the color of the piano’s sound in many of the composer’s works, for example, creating the noises of the night in “Lullaby” or the dreamy backdrop in “Romance.”

Maestro Stankovych’s work is a testament to his humanism; to his deep love and concern for his countrymen and for humanity. The composer and musicians were rewarded with a standing ovation. A reception to meet and greet the artists followed the recital.

Ms. Soroka records for Toccata Classics in London. “Yevhen Stankovych, Music for Violin and Piano” can be ordered through distributors around the world. For more information, contact info@toccataclassics.com.

The final concert of the Cultural Fund’s Music Series season will feature the acclaimed and legendary violinist Oleh Krysa at the Lyceum on Sunday, May 21, at 3 p.m.

This article was reprinted from The Ukrainian Weekly