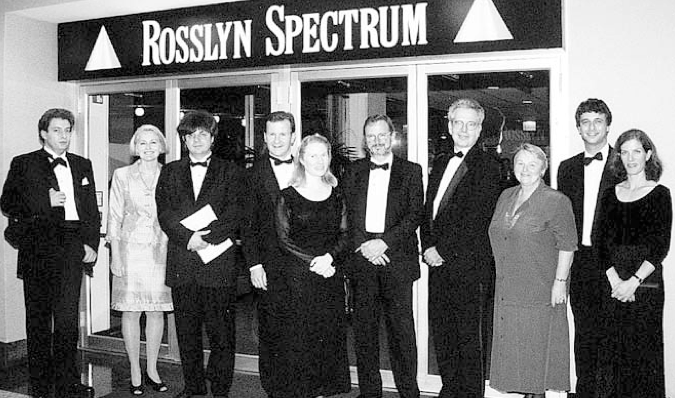 By Yaro Bihun – The Washington Group Cultural Fund, in cooperation with the Embassy of Ukraine, launched a series of benefit concerts in the 2000-2001 season in order to raise funds for the procurement of musical instruments for the Lviv Conservatory. The series venue is the Spectrum Theatre in Rosslyn, next to the Newseum. The first three concerts, in October and November—like the two scheduled in March and April of next year—presented soloists from Lviv and works by a featured Ukrainian composer.

In the first concert, October 3, it was pianist Volodymyr Vynnytsky and an ensemble of musicians from the Washington Opera Orchestra performing Myroslav Skoryk’s Concerto No. 3 for piano and string quartet and percussion. The program also included Mozart’s Oboe Quarter in F major, with oboist Igor Leshchishin and Beethoven’s Sextet for two horns, two violins, viola and cello, with Greg Drone and Bob Odmark as horn soloists.

While the first televised presidential debate kept many politically minded Washingtonians from being in the audience, those who came to the concert—the dean of the Washington Post’s music critics, Joseph McLellan, among them— found Skoryk’s Concerto, and Mr. Vynnytsky’s execution, moving.

“While the differences between a concerto and a piece of chamber music have been well established for centuries, and…never the twain shall meet,” Mr. McLellan wrote on October 5, “pianist Volodymyr Vynnytsky and colleagues performed the Washington premiere of a concerto that is also a piece of chamber music: Concerto No. 3 for piano and string quartet by Myroslav Skoryk, a very productive (e.g., 40 movie soundtracks) and impressively imaginative Ukrainian composer who is virtually unknown in the United States.”

The concerto’s last movement, titled “Life,” he added, is, like the first two movements, “unconventional in structure but emotionally and harmonically well within the late romantic tradition. Wild outbursts of passion alternate with charming melodies; displays of virtuoso temperament with moderate dialogue.”

• On March 5, soprano Anna Bachynsky and tenor Roman Tsymbala will pay tribute to Ukraine’s bard Taras Shevchenko in a concert of music, song and poetry.

• On April 23, soprano Oksana Krovytska and violinist Zenoviy Bogachek will perform a program to announced later.

Introducing the performers of the first concert, TWG Cultural Fund Director Laryssa Lapychak Courtney noted that the benefit series combines the goal of the Fund—to acquaint the greater Washington area with Ukrainian culture—with a need for assistance for those who create that culture in Ukraine. If successful, she said, the series will be expanded to help other conservatories and cultural institutions in Ukraine.

The series is organized by Chrystia Sonevytsky. The performances begin at 8 p.m. Tickets can be obtained at the door for $20; seniors and students, $15. Each concert is followed by a reception. Additional donations are gratefully accepted. The Rosslyn Spectrum Theatre is located at 1611 N. Kent Street, two blocks east of the Rosslyn Metro Station and next to the Newseum. Free garage parking is available in the rear of the building, off Arlington Ridge Road.