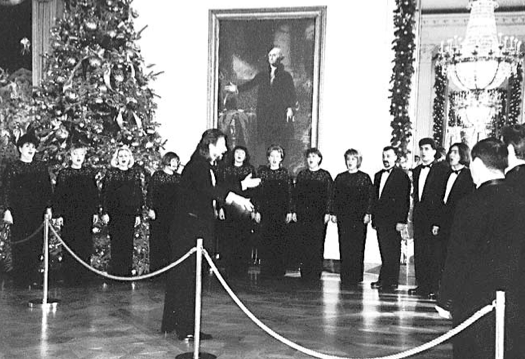 By Yaro Bihun – The Kyiv Chamber Choir visited Washington a few days before Christmas, and it came bearing gifts—the best of Ukrainian ecclesiastical and Christmas music.

The choir sang Ukrainian carols at the White House, baroque and contemporary religious music masterpieces at the National Cathedral, and a program combining both before a large audience at the George Mason University Center for the Arts.

The choir’s Washington visit began a Friday, December 19, with a reception at the Ukrainian Embassy, where the ensemble hinted at what would follow through the weekend. The choristers sang a tantalizing selection from their repertoire and joined the other guests in a singalong of Ukrainian Christmas carols.

The reception was sponsored by the Washington Group Cultural Fund, one of many organizations and institutions that assisted in bringing the ensemble to the U.S. under the lead sponsorship of American Friends for Ukraine, Inc. The Washington area sponsors also included the Washington Performing Arts Society, the George Mason University Arts Center and the Embassy of Ukraine.

The choir’s performance capped the 1997 Fall Season of the TWG Cultural Fund, which included a concert by the Ukrainian Bandura Chorus of North America, the Horowitz International Competition for Young Pianists Winners’ Recital, and the performance by mandolinist and fiddler Peter Ostroushko and guitarist Dean Magraw during the TWG Leadership Conference.

Washington was the second of four cities on the choir’s debut tour of the United States, which also included performances at the Ukrainian Cultural Center in Philadelphia, at New York City’s Carnegie Hall, and at the Music Hall in Portsmouth, New Hampshire.

“The group has only 20 singers, but what singers they are—big, marvelously focused voices, the kind that might easily hold their own on the opera stage but without the kind of operatic vibrato that can make an ensemble rattle,” wrote Washington Post reviewer Joan Reinthaler following their December 20 performance at the George Mason Arts Center. “They can sing wonderfully clean unisons and the basses have low E’s to die for,” she added. “These are, of course, the sort of voices that the music on their allUkrainian program was written for.”

The second half of the program, devoted to Ukrainian Christmas music, highlighted even more contemporary works. In addition to carols by Ms. Dychko and Mr. Stepurko, the choir sang carols by Yuriy Alzhnev, Anatolii Avdiievsky, Yevhen Stankovych and Alexander Yakivchuk. The audience, which filled most of the 1,800 seats of the George Mason Arts Center, rewarded the singers with a standing ovation, and in return, were presented with a few encores.

While the Saturday evening concert was the primary reason for the Kyiv Chamber Choir’s visit to the capital area, the most memorable event for the choristers was their performance earlier that afternoon at the White House. They were invited to sing Ukrainian carols during the annual VIP viewing of the Christmas-decorated White House, where they performed before the visiting diplomatic corps and were greeted by the First Lady’s chief of staff, Melanne Verveer, who is of Ukrainian descent.

Another memorable moment came the following morning, when the visiting choir stood in front of the main altar of the National Cathedral and sang a half-hour choral prelude to the cathedral’s Sunday religious service, filling the gothic structure with the religious works of Bortnyansky, Berezovsky, Stetsenko, Lysenko, Leontovych and Stepurko.

Founded in 1990, the Kyiv Chamber Choir, have performed extensively in Europe, winning at a number of prestigious choral festivals, and have recorded a number of CDs.

Photo caption: The Kyiv Chamber Choir performing Ukrainian Christmas carols at the White House, one of three performances in the greater Washington area.