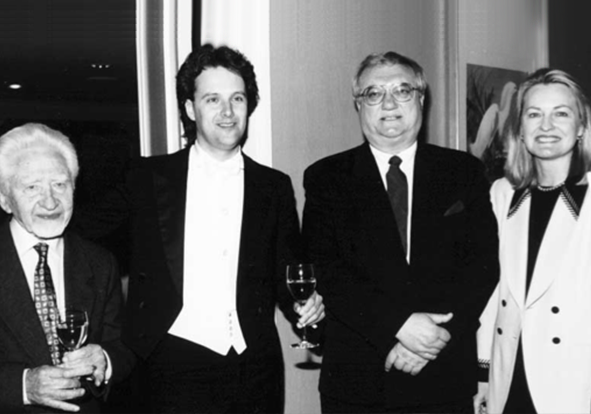 By Marta Zielyk – Among the highlights of the 10th anniversary commemoration of the Chornobyl tragedy was a stirring performance by the Odessa Philharmonic Orchestra in the Concert Hall of the John F. Kennedy Center for the Performing Arts in Washington on Sunday, April 28.

The performance was presented by the Washington Performing Arts Society, with our very own TWG Cultural Fund and its director, Laryssa Chopivsky, working through the Chornobyl Challenge ’96 coalition to arrange the appearance.

The orchestra, under the baton of Hobart Earle, the first U.S. citizen to serve as music director of an orchestra in the former Soviet Union, delighted the audience with a diverse program that also included works by Ukrainian and American composers.

The concert began with rousing renditions of the Ukrainian and American anthems performed by the full orchestra. As The Washington Post music critic Charles McCardell noted April 30 in his review of the afternoon concert, “Philosophical musings dominated the concert’s first half. With trumpet and flutes querying and attempting answers to the meaning of existence from strategic locations offstage, the quiet strings provided sustained chords like a minimalist hymn during Charles Ives The Unanswered Question.”

This piece was followed by the symphonic poem Taras Shevchenko, whose composer Kostiantyn Dankevych was born in Odesa in 1905. The first half of the program ended with the appropriately solemn and moving Addagio from the Tenth Symphony by Gustav Mahler.

Following intermission, the Odessa Philharmonic Orchestra presented several works by contemporary Ukrainian composers. The orchestra performed the Carpathian Concerto by Myroslav Skoryk, and Orchards Blooming in the Carpathians by Mykola Kolessa, who, at 92, is the grandfather figure of contemporary Ukrainian music. Mr. Kolessa was present at the Kennedy Center that day and received a standing ovation from the audience after being acknowledged by Mr. Earle.

The official program ended with the ever popular Appalachian Spring by Aaron Copland and a standing ovation for maestro Earle and the orchestra. Critic McCardell again praised the Odessa Philharmonic’s performance of this piece, noting that “Thanks to patient collaboration of Earle and the orchestra nothing was lost in the translation.”

After sustained applause from the audience, the Odessa Philharmonic Orchestra ended the afternoon concert with a rousing rendition of the overture to Mykola Lysenko’s opera Taras Bulba. In a brief statement to the audience prior to performing the encore, Hobart Earle remarked that even though the intention of the concert was to commemorate a tragic episode in Ukrainian history, he would like to end the program on an uplifting note, which would more aptly reflect the hope of the Ukrainian spirit, which has remained unbowed through the centuries of its tragic history.

In the audience were members of the diplomatic corps and representatives of the U.S. government—Ambassador at Large to the New Independent States James Collins, Special Assistant to the President and Deputy Chief of Staff to the First Lady Melanne Verveer, the first US ambassador to Ukraine Roman Popadiuk, and Victoria Reznick, of the National Security Council.

Following the concert, there was a reception at the Watergate Hotel for dignitaries, sponsors of the concert, and members of the Odessa Philharmonic Orchestra. The reception, sponsored by Odessa Foods International, Inc., was hosted by Ambassador and Mrs. Yuri Shcherbak.