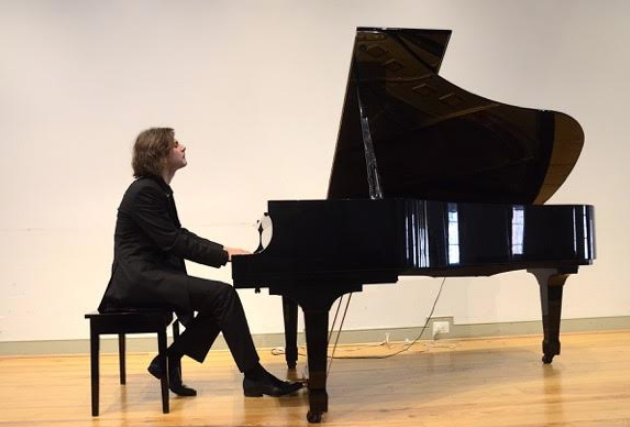 On April 22, pianist Serhiy Salov cut a dashing Byronesque figure as he bounded up to the stage at the Lyceum: Alexandria’s History Museum in Old Towne, Alexandria, just outside Washington, DC. Youthful and lanky, he hails originally from the war-torn city of Donetsk. For more than a decade, he has been a Canadian resident in Montreal.

Christine Lucyk, Co-Director of the TWG Cultural Fund, welcomed the audience to this last recital of the 2017-2018 season, and thanked all the sponsors of the Sunday Music Series. She informed the audience that in 2004 Salov won 1st Prize at the prestigious Montreal International Musical Competition, and in 2014 the first Richard Lupien Improvisation Prize at the same Competition. Ms. Lucyk also mentioned that his program reflected the range of his repertoire, from Bach to the Romantic composers, to contemporary music.

Before beginning his program, Salov explained the juxtaposition of Chopin and Bach in his program. Both Bach fugues were composed as improvisations, and Chopin composed his four Ballades using this technique. Salov said, “Chopin greatly admired Bach as well as Mozart, and only one of his contemporaries, Bellini, but it was Bach that was always on Chopin’s desk.”

In his performance, Salov led seamlessly into the Chopin from the Fugue in 3 voices, and then from the Chopin into the amazing Fugue in 6 voices, intending the Fugues to be bookends for the four Ballades. In the Bach, his playing was at once cerebral and sensitive as his long slender fingers moved gracefully and with precision, like dancers caressing every note and creating long melodic lines balanced between all 3 or 6 voices. In the Chopin, Salov’s power and technique were on display as each Ballade came to its fiery and devilish finale.

The second half of the program was devoted to works by two Ukrainian composers: Mykola Lysenko, considered to be the father of Ukrainian music, and Ihor Shamo, a Kyivan composer, who studied composition with Boris Liatoshyinsky and Lev Revutsky at the Kyiv Conservatory. Lysenko’s Ukrainian Rhapsody “Dumka-Shumka” vividly incorporated Ukrainian folk and dance themes, as well as patriotic hymns, in lively and dramatic improvisation.

Shamo’s ever popular My Kyiv (Kyive Miy) is considered to be Kyiv’s anthem. Salov explained that Shamo’s approach to composition was different from that of Bach, Chopin and Lysenko. Shamo loved painting, and Ukrainian folk themes were subtly woven into his descriptive and pictorial compositions. “Hutsulian Watercolors” included depictions of a sunrise, waterfalls, dances, and rain showers complete with thunder and rainbows. Salov’s fingers glided effortlessly across the keyboard in sparkling arpeggios or percussively struck the keys like drums.

The enthusiastic audience of music lovers was rewarded with the quintessential encore piece, Liszt’s “La Campanella,” in which Salov’s technique was once again put to the test. Those who lingered after the reception were treated to a sing-along, with Salov, of course, at the piano. In a world in which we are increasingly more connected to our phones and computers, events that bring us together physically are that much more important and rewarding. The afternoon was perfect.

On August 15, Serhiy Salov will be the soloist with the Philadelphia Orchestra in Saratoga Springs, NY. And next fall, the Cultural Fund looks forward to celebrating its 25th anniversary season.

This article was repinted from The Ukrainian Weekly