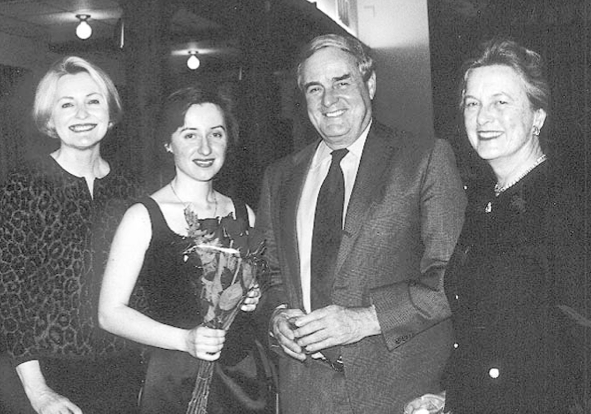 Writing about the February 23 recital at the Chevy Chase Women’s Club, the critic noted that until this recital, he had never heard a note composed by Myroslav Skoryk and added that this contemporary Ukrainian composer should be better known.

“He is an original, a composer with a distinct identity, a mastery of many idioms—jazzy, folk-style and moderately avant-garde—that he uses to shape works embodying piquant contrasts, convincing climaxes and sometimes impish wit,” Mr. McLellan wrote.

He said Mr. Skoryk’s Sonata No. 2 for Violin and Piano, his Burlesque in C for Solo Piano and Spanish Dance for Violin and Piano were the highlights of the program, which featured works by Ukrainian composers—”a sadly neglected group in this country”—but also included such landmarks in the standard repertoire for violin and piano as Giuseppe Tartini’s “Devil’s Trill” sonata and Pablo de Sarasate’s “Zigeunerweisen” (“Gypsy Airs”).

The reviewer made a special note of Ms. Soroka’s “two talented pianists who took turns playing and turning pages”—Ms. Kysylevych, who also soloed in the Burlesque, and Ms. Lassowsky, whose partnership in the “Zigeunerweisen,” he wrote, “helped to produce one of the finest performances I have ever heard of that much-played work.”

Joseph McLellan called Ms. Soroka “a superbly equipped violinist, at ease with the technical challenges of Sarasate or of Jeno Hubay’s Czardas No. 2, but even more impressive in the gentler moments of Evhen Stankovych’s Cradle Song and Mykola Lysenko’s pleasantly conventional Fantasy No. 2 on Ukrainian themes.”

“Her tone is warm and mellow on the low strings,” he said, “brilliant on the high strings, perfectly controlled and expressively used.” The recital was sponsored jointly by the Cultural Fund and the Embassy of Ukraine, which featured the performers in a separate program at the Embassy on the following day.

Solomia Soroka, who debuted at the age of 10 with the Lviv Philharmonic Orchestra, is the first-prize winner of three international violin competitions—the Lysenko Competition, the Prokofiev Competition and the “Zolota Osin.” She has soloed with many chamber and symphony orchestras and is currently a doctoral candidate at the Eastman School of Music in Rochester, N.Y.

Myroslava Kysylevych, an honors graduate from the Lysenko Higher State Music Institute in Lviv, has performed throughout Ukraine and in Eastern Europe. Ms. Kysylevych is now a Master of Music candidate at the University of Minnesota, studying with Lydia Artymiw.

Oksana Lassowsky, a semi-finalist at the Stravinsky International Piano Competition at the University of Illinois, has given recitals in Cleveland, Philadelphia, New York, Buffalo, Reading and Annapolis.